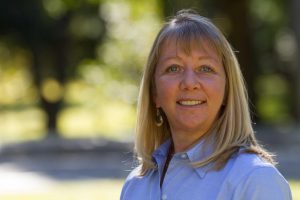 A native of Ames, Iowa, I received my B.S. in Animal Science from Iowa State University and spent 2 years working with dairy farmers in Wisconsin. I then ventured into the travel industry and spent several years living and working in resort destinations both domestic and international, escorting motorcoach tours all over the world and last, corporate meeting planning for DuPont and DuPont Merck Pharmaceuticals.

I began seeing a chiropractor after a friend told me she thought I’d be a good one and found that the chiropractic philosophy of “healing from within” made sense to me. Two years later, I was enrolled at Palmer College of Chiropractic in Davenport, Iowa at the age of 35.

I started under NUCCA care while in school after some pressure by a friend. Immediately following my first adjustment I thought I’d been “scammed” and that absolutely nothing had happened!
But as I was walking to my car I felt like my feet were more solid with the ground. When I got home, I fell asleep for four hours. When I went for a run several days later, my knee didn’t hurt for the first time in years! And slowly but surely, the vertigo that I had had for 25 years after being hit by a car started going away. With all those changes from an adjustment that “felt like nothing”, how could I do anything else?!

I graduated from Palmer College of Chiropractic in October of 1999, and knowing that I did not “know enough” about so many things in running a practice, I moved to Austin in March of 2000 to work for Dr. Patricia Gregg, who had been practicing NUCCA for 5 years. After that initial year, we found we balanced each other well and created “Back N Balance”, each of us having our own practice but sharing space, staff and all the trials and tribulations accompanying being “in practice!”

From that point in 2001 we went from just the two of us, to a building with 3 and then 4 NUCCA docs all under the same roof (with then, only about 10 in the whole state of Texas!) Now, 13 years later, another transition for me – that to my own practice in the new South Austin location.

From my introduction to chiropractic “way back when” when I was living in Delaware, I felt that chiropractic, and NUCCA in particular, was and continues to be amazing work! I am humbled and enthralled everyday by the powers inherent in the body, its ability to heal and change and by my small part in the process.
For those of you who know me from Back N Balance, my South Austin office location is my attempt at bringing more of what I enjoy and less of what I don’t into my life – less time in Austin traffic, more scheduled time with my wonderful patients (you!) and hopefully, more time for me as well!

In essence, just like all of you, I am working to bring my life “Better In Balance”.

You can call us anytime, schedule online, or send us a message using our contact form. We will respond to messages as soon as possible.
FREE CONSULTATIONS for prospective patients
SCHEDULE NOWCONTACT US
BETTER IN BALANCE
NUCCA Chiropractic Care for Austin, Texas
Other services provided: Infrared Half Sauna

Visit Us in South Austin